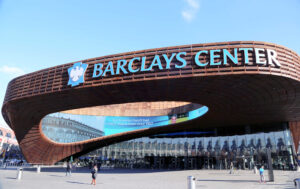 When Barclays Center first opened its doors in 2012, the purpose behind Bruce Ratner’s vision was to have a venue perfect for his newly acquired basketball team, the Brooklyn Nets. That vision began in 2004 after he purchased the team for three hundred million dollars. In the eight-year history, Barclays took to go from concept to reality, there was a considerable amount of challenges that witnessed the ownership of the team and the venue change hands on more than one occasion.

Before Barclays went from concept to reality, the real estate developer first needed to convince the community that his vision for the city, plus its Brooklyn borough, that it was a good one. At first, he was met with opposition that was concerned about its environmental impact. Barclays meant a handful of residential buildings and businesses would be demolished in order to make way for the new center. Between that and public subsidies, there were a handful of lawsuits that erupted as a result.

After purchasing the Nets from New Jersey, Ratner’s idea was to move his team to Brooklyn’s Pacific Park as soon as it was ready to accommodate them. Ideally, this was to bring a major professional team back to Brooklyn for the first time since the Dodgers relocated to Los Angeles in 1957.

Originally, Barclays was supposed to be ready by 2006. However, with so much opposition going against it at the time, this threw a series of financial and legal complications in Ratner’s lap that Pacific Park Brooklyn’s fate now hung in the balance. Because of this, Ratner began looking into selling his team. On September 23, 2009, Russian businessman Mikhail Prokhorov bought the Nets for $200 million.

When 2009’s global recession hit, this caused additional financial issues that put construction for Barclays on hold until 2010. Also in 2009, Prokhorov’s Nets played two preseason games inside New Jersey’s Prudential Center before agreeing to stay there for two seasons while Barclays was being built.

In the meantime, approval of Barclays and Pacific Park Brooklyn came on November 29, 2009, when the New York Court of Appeals made its decision. The Empire State Development Corporation was determined to see this proposed project go through, even if it meant encountering opposition from a population of people who opposed it.

The situation became extreme enough that it was taken to court. However, Brooklyn Supreme Court ruled in favor of the real estate development on March 1, 2010. Ten days after this court decision was made, the construction of Pacific Park was underway. Even after it opened for the first time on September 21, 2012, it met with two hundred protestors on site.

The first to hold an event there was Jay-Z, who also happened to own a share of the Brooklyn Nets and Barclays Center at the time. That was held a week after the venue opened. 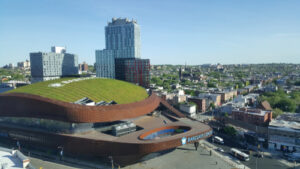 The initial concept of Barclays was designed by Frank Gehry, who originally proposed a rooftop park open only to the residents of the Atlantic Yards complex. It would be ringed by an open-air running track that could double as a skating rink during winter seasons. It would offer a panoramic view of Manhattan. Part of this architectural plan included the 620-foot Miss Brooklyn Tower. The cost of this project would have been one billion dollars before Forest City Ratner had adjusted in February 2008, then again in January 2009, by two million dollars. The reduction in price also included the elimination of some of Gehry’s design ideas, including the tower.

While most urban venues have their own parking lot, Barclays does not. It does have an extensive public transportation hub that makes it easy to approach by bus, railroad, and subway. Its entrance plaza square footage is 38,885 and is Pacific Park Plaza’s focal point. There is a multi-million dollar transit structure that connects with Atlantic Avenue-Barclays Center’s subway station.

There are only two truck and bus entrances leading into the center. There are two side-by-side capacity elevators that can hold up to eighty thousand pounds, lowering vehicles from grade level to its loading dock area located thirty-five feet below. There’s a large turntable that rotates in position as it accommodates the vehicles seeking to access one of the four loading docks that are situated around it.

Designed with intentions to primarily host basketball games, Barclays hosted its first game between the NBA’s Brooklyn Nets and Washington Wizards on October 15, 2012. The official launch of the first season for the Nets began with a home game on November 3, as it was pitted against the Toronto Raptors. This came two days after it was scheduled to face off against the rivaling New York Knicks. The reason for the cancellation by then-mayor Michael Bloomberg was because of the transportation complications that resulted after Hurricane Sandy paid its destructive visit to New York City.

Since 2013, Barclays has served as host of the NBA draft as an annual event. The only exception was in 2020, thanks to the COVID-19 pandemic. That year the NBA resorted to hosting a video conference instead. In 2015, the NBA All-Star Weekend festival was held in this venue location. Two years later, the Long Island Nets, an NBA development team belonging to the Brooklyn Nets, had to hold their home games inside Barclays as their home base, Nassau Coliseum was undergoing extensive renovations.

In October 2012, the New York Islanders stated they were about to move into Barclays in 2015. By that time, the team’s lease with Nassau Coliseum would come to an end. The reason behind the move was Barclays had a seating capacity that was greater than the venue in Long Island. It wasn’t by much but this came out of necessity as NHL’s standards for regular attendance were higher than what Nassau could accommodate.

However, this came with a problem as Barclays was designed with basketball in mind, not hockey. The design of the building, plus the positioning of the scoreboard, put the seating arrangements in Barclays at a disadvantage compared to Nassau. Because of this, what was thought to be a better location for the New York Islanders brought forth some setbacks that placed them straight back into Nassau. At one point, the Islanders shared their home games between the two locations until the newly developed UBS Arena was ready to accommodate them.

After Joe Tsai obtained full ownership of the Brooklyn Nets and Barclays Center on September 18, 2019, he also became the NBA’s Governor of the team and its affiliates, as well as the center’s chairman. In addition to owning and controlling these entities, Tsai also acquired WNBA’s New York Liberty that same year. In 2020, he moved the ladies’ team over to Barclays.

Thanks to Barclays Center’s contemporary design, it serves as a reflection of Brooklyn’s brownstones, and New York City’s developmental direction. This includes the Diary of Brooklyn mural, painted by Jose Parla. This ten-foot by seventy-foot work of art focuses on what made Brooklyn great, to begin with. The mural’s wording includes “Big Daddy Kane,” “Brooklyn is,” and “immigration.”

Barclays Bank named the venue after itself as it exercised the naming rights it earned through an arrangement that was made on January 18, 2007. It was they who agreed to cover the four hundred million dollars for the duration of twenty years. This amount was cut in half in 2009 in response to the year’s plunge into a global recession.

Despite criticisms and protests received by people against Barclays Center, it also received critical acclaim for its building design. While it may not have been up to snuff for hockey fans, as a concert venue it won a 2012 award for Best New Major Concert Venue. It was also recognized in 2013 as Sports Business Awards Facility of the Year, Architizer A+ Building of the Year, and the Brooklyn Chamber of Commerce Brooklyn Building Award for Economic Development. Nationally and internationally, Barclays has been regarded as one of the ten most important stadiums in the world.

Apparently, major sports and entertainment promoters from UFC and WWE seem to agree. On several occasions, Barclays has frequently hosted shows that have been featured as weekly televised events, as well as pay-per-views. At one point, it surpassed Madison Square Garden when it came to ticket sales revolving around concerts and family-friendly shows.

Adding to Barclays’ legacy is the reality that it was instrumentally responsible for returning a major sports team back to the Brooklyn borough. Not since the Dodgers relocated to Los Angeles in 1957 has the community had a major sports team in the neighborhood. Barclays changed that when it first brought the Brooklyn Nets and then, briefly, the New York Islanders.

Since the venue was designed to bring a major sports team back to Brooklyn, the memory of the Dodgers plus the legend himself, Jackie Robinson, has come up. As of 2020, the momentum of changing the arena’s name to honor him has picked up steam. Already, he has many name dedications throughout the borough as a man who was so much more than a baseball hero. He was a human rights activist who was instrumentally responsible for tearing down the race barriers that were in place in Major League Baseball in 1947.

Minus one unfortunate incident that resulted in the accidental death of an ironworker on February 24, 2015, the future of Barclays Center is still full of promise. What would make it even brighter is if Barclays Bank chose to honor Brooklyn with the increasing demand to have it renamed to something like Jackie Robinson Center. 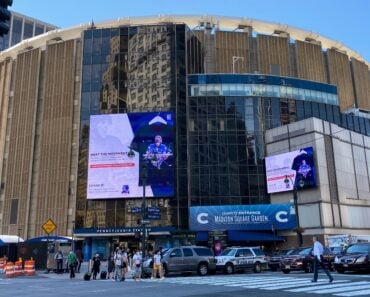