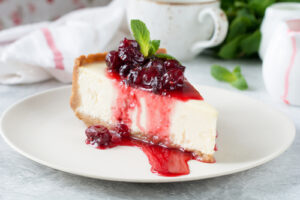 The history of the New York Cheesecake first beings with a history lesson about the product known as cheesecake itself. It is believed the first cheesecake came from the Greeks as anthropologists excavated cheese molds on Samos Island that has an origin date as far back as 2,000 B.C. There are biblical references to cheese and cheese products such as Job’s “Did you not pour me out like milk and curdle me like cheese?” quote from the tenth vers of its tenth chapter. It is also mentioned in 1 Samuel 17:18, “Also take these ten cheeses to the commander of their thousand. See if your brothers are well, and bring some token from them.” This is when a young David was sent by his father to meet up with his older brothers who were serving in King Saul’s army when the Israelis were at war against the Philistines. This was the same military conflict when David went up against the giant known as Goliath and struck him down with a single stone shot in the forehead.

Was it possible cheesecake was a product already available during the timeline of the Bible itself? Considering what was found on the Greek Island that is believed to be over four thousand years old, the answer to that would be yes. In Greece, cheesecake was considered to be a good source of energy. This was something they likely learned from civilizations that date even further back than the Ancient Greeks as we know it. In fact, the first Olympic games, which were dated in 776 B.C., had the athletes on a cheesecake diet as a means to optimize their performance level as competitors.

At the time, the Greeks used the simple formula of cheese, honey, and wheat flour to form their cheesecakes. Among ancient cultures like the Greeks, wedding cakes were made from cheesecake instead of what is traditionally being used today. At the time, the recipe called for the cheese to be beaten down in a brass pan until it was smooth and paste-like before adding in the flour and honey. The mixture would be heated up, then thoroughly cooled before serving.

Right after the Greeks were conquered by the Romans, the original cheesecake recipe was modified to include crushed cheese and eggs. This time, all the ingredients were baked under a hot brick and served warm. It was also during this time the Romans began to put this cheese filling in a pastry, then serve this on special occasions. The Roman credited with the oldest known cheesecake recipe was a politician named Marcus Cato. His recipe was dated to the first A.D. century. As the Romans continued to conquer one nation after another as they expanded their empire, various cheesecake recipes were introduced to the rest of the European population. While each culture further evolved into its own identity, nation for nation, so did the variations of how to make a good cheesecake.

When the first cookbook in history was printed in 1545, cheesecakes were described as flour-based sweet food. At the time, chefs serving royal families would spend hours perfecting cheesecakes according to their own ideas. It wouldn’t be until the eighteenth century the cheesecake styles modern society recognized today would finally begin to take shape. It was at this time the Europeans began using beaten eggs instead of yeast to make their baked goods rise. Doing so removed the yeast flavor so that the cheesecakes would taste more like a dessert. It was this style of cheesecake the Europeans brought with them when they began to migrate to the United States. It would be in the 1730s that Philadelphians introduced the Cheesecake House Tavern. At the time, however, it was a different recipe than what the innovative bakers from New York did that would turn into something else.

In A New York Minute!

In 1872, a Chester, New York dairy farmer named William A. Lawrence was attempting to replicate the French cheese known as Neufchatel. The end result wasn’t as expected as the process led to the creation of cream cheese. As it turned out, this accidental discovery became an American staple ingredient. Three years later, he was approached by a New York grocery firm to modify an even richer version that saw large amounts of heavy cream added to make this cheese more spreadable. It was then packaged in foil and distributed to local stores with the brand label Philadelphia Cream Cheese. This company was later purchased in 1903 by the Phoenix Cheese Company, then purchased in 1928 by Kraft Foods Inc.

Despite the change in ownership, Philadelphia Cream Cheese remains the familiar favorite that graces the North American grocery stores even today. Despite its name, Philadelphia Cream Cheese started off as a New York product. The name was chosen as a marketing ploy by A.L. Reynolds as creamier cheese products typically came from Pennsylvania-based dairy farmers as opposed to the farms in New York at that time.

The classic New York-style cheesecake, as it was accidentally intended in 1872, was served as the cake only. There were no additions such as fruit or any other kind of topping as this would have served as an insult to the signature flavor at the time. The extra egg yolks that were used in the cream cheese cake mix managed to accomplish this. An authentic New York Cheesecake is known for its smooth taste on its own, which is why it became so famous in the first place. Upon the turn of the twentieth century, New Yorkers were so in love with the dessert that there were very few restaurants in the region that didn’t have their own version of cheesecake on their own menus. Interestingly enough, the rest of America had yet to catch on as they still favored the cheese curd style of European origin.

James L. Kraft migrated to Buffalo, New York from Fort Erie, Ontario, Canada, in 1902 to assume the role of secretary and treasurer of the Shefford Cheese Company. In the next year, he became a partner in the company before the agreement was abruptly dissolved when he went to Chicago, Illinois on a business trip. With only sixty-five dollars to his name, Kraft rented a horse and wagon to establish his own business of buying cheese at wholesale prices before selling it to local retail grocers. At first, he struggled before deciding to make God a business partner. Five years later, his business grew large enough that he recruited his five brothers to join him.

In 1912, J.L. Kraft & Bros. Company established its New York City headquarters. This was the same year Kraft invented a method to pasteurize cheese. By 1914, what started off as J.L. Kraft & Bros. Company became Kraft Foods Inc in Stockton, Illinois. In 1916, Kraft patented its pasteurizing cheese process that became spoilage resistant. This allowed the cheese to be shipped at longer distances without the need for refrigeration.

Not only did New Yorkers benefit from this as cheesecake buffs but it played an instrumental role in the evolvement of this delicate dessert. As fate would have it, 1928 witnessed Kraft Foods Inc buying out the Phoenix Cheese Company, gaining full ownership of Philadelphia Cream Cheese, and the creative direction it would take as the leading brand of choice when it comes to making the perfect New York-style cheesecake.

Arnold Reuben started with the classic New York Style Cheesecake during the early 1930s didn’t come about until after cheese producers began to use stabilizers during the late 1920s as a means to smooth out the cream cheese mixture. Culinary buffs who passionately follow food history will recognize Arnold Reuban for his signature sandwiches. He is also the man behind the creation of the New York Style Cheesecake as we know it. Born in Germany in 1883 before moving to America’s New York City when he was still young, he was invited to a dinner party where he was served his first cheese pie. He was so intrigued with this dish that he began to experiment with the cheesecake recipe until he came up with a new and improved version of an accidental mistake that was first made in 1872.

The usage of cream cheese among New Yorkers was a far cry from what the Greeks normally use, which has been feta and mizithra. The Romans use ricotta while the Germans go with cottage cheese and the Japanese use a cornstarch and egg white mix. Around the world, this iconic food item has stood the test of time as a food favorite for sweet tooths of all ages. In America, as the beloved cheesecakes continued to evolve, the moment the cream cheese-based versions reached New Yorkers the North American culinary world forever changed.

Arnold Reuban, the Jewish immigrant from Germany, practically turned New Yorkers into cheesecake addicts as he ran a succession of Manhattan restaurants. This is also the same man behind the infamous Reuban sandwich with its rye bread, sauerkraut, sliced corned beef, Russian dressing, and Swiss cheese combination before it was grilled to perfection. It wasn’t uncommon to witness a hungry New Yorker enter one of Reuban’s restaurants, devour a sandwich, then some cheesecake, before going on their merry way with full bellies.

What he started as a trend quickly saw rival delis and restaurants inspired to do the same thing with their own versions. This includes a certain deli named Lindy’s Restaurant that opened its doors in 1921 on Broadway near 50th street in Manhattan. Like Reuban, Leo and Clara Lindemann were New York immigrants from Germany. Just like Reuban, they opened up their own deli that featured an impressive menu of mouthwatering sandwiches and delectable cheesecake desserts. However, what set Lindy’s apart from its chief competitor was the decision to top its cheesecakes with strawberries in a gel. At one point, a rumor circulated Lindy hired one of Reuban’s bakers in order to acquire his unique recipe. It wasn’t until a 1948 publication in the Los Angeles Times revealed Lindy’s cheesecake recipe came from food journalist Clementine Paddleford and chef Paul Landry.

As a frequent customer, novelist Damon Runyon wrote and published his stories that often referenced Lindy’s as “Mindy’s.” These stories later inspired the 1950 Broadway musical, Guys and Dolls, a theatrical production that wound up immortalizing Lindy’s and the infamous cheesecakes. As “Mindy’s,” it was wagered whether it sold more than its equally famous apple strudels. As the famed New York cheesecakes continued to grow in popularity, so did the competitiveness among New York City bakers. It would be during this time the introduction of graham cracker crumbs became the next common staple that would be frequently found as the crust of choice to accommodate cheesecake recipes. Sour cream also made its way into the recipe books, which brought forth an even creamier texture with tang. This came during an era when refrigerators and freezers became part of a grocery store’s floor space.

We could not write an article on the history of New York Cheesecake without mentioning Junior’s Orginal Cheesecake. Hand’s down this is the best Cheesecake in New York and it has been for a long time. It’s pretty much the best cheesecake in the world. We can’t help but brag, but when one is a native New Yorker, you come to realize that we have the best of almost everything from a food perspective from pizza to bagels to every type of restaurant and of course….cheesecake! 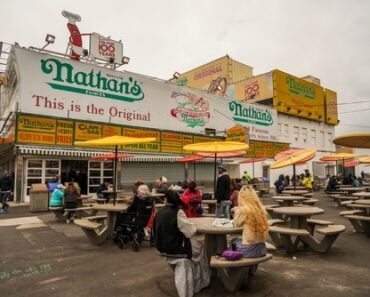 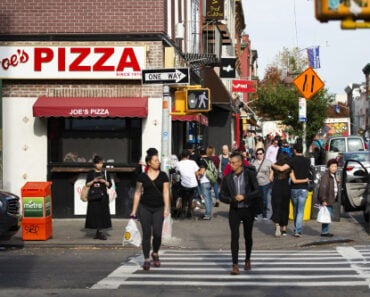 History Of The Museum Of Modern Art (MoMa)